skip to main | skip to sidebar

Top ten lists of American worries include things like terrorism and global warming, as well as more personal things like paying the bills and losing a job or getting a job, worries about health and relationships.

I did get one interesting answer – someone said, “I'm worried about being worried”. That is, the person knew exactly what Jesus says in our Gospel reading this morning, “Do not be anxious about anything”. And the person worried that because he worried at all – maybe he wasn't really a Christian!

Today's words of Jesus in the Sermon on the Mount cut both ways. They cut us down with razor-sharp precision, for we all worry. But they also renew and restore with precious promises – and show us why in Christ there's no need for anxiety.

“Therefore do not be anxious about tomorrow, for tomorrow will be anxious for itself. Sufficient for the day is its own trouble.”

Maybe we should take a step back and see where Jesus started here – with anxieties about money. Many of us, perhaps all of us at times, make money our master. And if not money itself – the things money can buy. The material items of life. For you it may not be clothing or food – we're fortunate enough to have most of those needs met. But it may be anxiety about paying off the credit card or the monthly mortgage. It may be about selling your house or paying for your kids' tuition... or soon enough, tax time.

All of these are good things – money and the things it can buy – but they are not to be our master. They are not to rule over us. We cannot serve them and God, our true master. And when we are anxious about them, when we spend our days preoccupied with things – we are not trusting in our true Master as we should. It's a lack of faith that leads to such anxiety. It's a lack of trust in God that leads us to worry about tomorrow.

Well, sure, don't worry about money. And don't worry about food or clothing. So if we can do that, are we off the hook? Most of the things people seem to worry about around here aren't food and clothing – we're more worried about our families, our loved ones. Isn't that a noble form of worry? Ah, but even these can become our masters, our idols, and take the place of our God. For just as God provides food and shelter, and takes care of our life, he knows how to best care for our loved ones.

Jesus tells us not to worry or be anxious for several reasons. For one, it doesn't do any good. It won't add a single day to our life. Instead, we observe, worrying is really not a pleasant experience. It brings troubles real or imagined into the present, where they don't belong. Jesus says each day has enough trouble of its own. He doesn't want us to make ourselves suffer in the futility of worry. It's useless, and ultimately makes us miserable.

But an even better reason to not be anxious is the promise – that God will care for you! Jesus unfolds this in various ways – comparing us to the lilies and the birds, clothed and fed by God without care or worry. And then he says, aren't you worth more than these? Then don't worry – God will care for you all the more!

If you doubt God's care, if you don't trust that he will provide for you. If you are beset by worry and hounded by your anxieties, if you just can't see that God wants what is best for you and will go to great lengths to provide it – then look again to the cross.

Ponder this, “he who did not spare his own Son, but gave him up for us all, how will he not also with him graciously give us all things?”

God provided for our greatest need – our only real eternal need – the salvation of our souls.

If we were still lost in sin, then no amount of food or clothing or money or anything would matter. We would be lost eternally. We would be destined for destruction. We would have bigger worries than these. But Christ has saved us from all this by his blood. He who was impoverished and naked and hungry and thirsty for us – he gives us a robe of righteousness, bread from heaven, the water of life, and the riches of his grace – a crown of glory that will never fade. You think the lilies and the birds have it good? Remember his promises to you! Recall what God has done for you in Christ!

Now, it's true, we don't always see the physical blessings we want when we want them. And it's true that some people do go hungry, and naked, and some people even starve to death. These promises to provide for us are not, ultimately, of this world. For while God does provide for us here, and everything we have here is a gift from him, there will be a day when this life ends. When the lights go out, and no money will help us, no food will keep us alive another day.

But it's that day when we will see the fullness of his promises. Then we will have abundant and eternal provisions beyond our wildest dreams. That day is an end to all worry, anxiety, or any thought of a future that holds any trouble at all.

So don't worry about tomorrow. Instead, trust in the one who provides for you. The one who provided even his own Son. He knows your needs. And he promises to provide for you eternally. Don't worry about tomorrow, but in faith, look further to that glorious day when all his promises come in full, and we share the eternal blessings of heaven.
Posted by Preachrboy at 7:16 AM 3 comments: 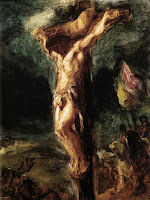 Theologians in times past developed a list of “7 deadly sins”. These grave sins, they argued, led to the destruction of faith and eternal damnation.

We Lutherans consider all sins deadly, apart from repentance and faith in Christ. Still, these 7 are a useful list to help us reflect on our spiritual shortcomings and explore the many facet's of Christ's forgiving love. Join us for this mid-week Lenten series as we consider how Jesus forgives us of:

Sloth - Maundy Thursday – April 21st
Posted by Preachrboy at 8:29 AM No comments: 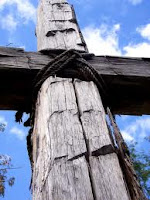 “Well, good morning to you too, pastor, nice way to start the sermon.” But it's true. In today's Gospel reading Jesus smacks us up and down with the law. He takes what laws and rules people were comfortable with – you know, the ones we can mostly keep – and he blows them up in our faces, showing us how truly impossible it is to keep the law of God.

All of these sins, which we think of as “no big deal”, Jesus pulls the rug out from under us. They are a big deal, as big a deal as hell itself.

Nor is he just trying to scare you straight – so that you'll shape up for fear of punishment. It's too late for that anyway. All of us have already earned our own death, and worse. The perfection God demands was never in our reach anyway, and we'd be fools to think we can get there tomorrow.

So why, then? Why does Jesus cut us down with this extreme law? Why does God, for that matter, make it so tough for us to keep it? It's like Jesus is taking our sin and failure here and rubbing our noses in it – pointing out to us in starkest terms just how much the law has us dead to rights.

It's to drive you to despair. It's to show you how hopeless your situation is. It's to lay out for you that there is no way in heaven, earth, or hell, that you can measure up. “You have heard it said...” yes, we've heard a lot about the law, and how we can do this or that. How if we only follow this, or keep that, or just think this way – then the solution is within our grasp. We hear this from false teachers who may even believe it themselves – that we can save ourselves from disaster. That the choice is ours, the power is ours, that we just have to do ______. But it's a lie.

“You have heard it said...” but JESUS says something different. He raises the bar. He makes it harder, he makes it impossible. Rather, he shows the truth that it is impossible to please God with our works, he brings our sins to light, and leaves us in despair, without hope, lost.

But he doesn't leave us there. If we were to look to ourselves, we could sit in a corner and cry about how hopeless it is. But there's somewhere else to look. If we are to keep trying to reach up, to stand up, to rise up to the occasion, we will always fall and fall short. But there's someone who reaches down to us. It's Jesus.

These words aren't the only words Jesus ever said. And scolding us, though we deserve it, isn't the only thing he ever does.

He raises the bar on the law, but he also raises the bar of his cross. This is why he came – the cross. And there he hangs and suffers and dies, to wipe out all our law-breaking. There he is raised, for all to see, the perfect sacrifice, dying for all. There's you're only hope for God's favor, but what a hope it is!

What salvation could be more certain than the one that God himself accomplishes? We, who can do nothing right – we get to rely on him who does everything well. He who was without sin – the only one ever – he became sin for us. The only one who didn't deserve death takes it on for all who do. The only one not subject to death makes himself subject to death for his rebellious subjects, and wins life for us by it.

He shows us our sin, clear as day. But he doesn't just pat us on the head and say, “Close enough. Try harder next time, now run along”. Nor does he leave us in despair. Instead he takes the punishment from us. He descends to the depths for us. He dies our death, takes our cross, and gives us life.

And in doing so, he raises us. Through him, and only through him, do we meet God's standards. In him, we are declared perfect, made perfect. God sees us that way, even now. He works on us, and in us, by his Spirit - he has “begun a good work in us”, and he will “bring it to completion at the day of our Lord Jesus Christ.” What a joy it will be, on that final day, to be fully free from sin in every way.

No we are far from perfect. We fall short of the bar, especially the high bar Jesus sets for us in the Sermon on the Mt. Repentance is a daily struggle. But not a hopeless one.

For Jesus meets every demand of the law, and through his cross, wipes away our transgressions. Newly created in him, by water and word, we are raised to life – now and forever – and perfected by him.

Jesus raises the bar on the law, but he also raises us, even to eternal life. Thanks be to God! Amen.
Posted by Preachrboy at 4:58 PM 1 comment:
Newer Posts Older Posts Home
Subscribe to: Posts (Atom)